Prologue:  Statins are of some use as a part of the inflammation abatement and LDLp reduction approach for secondary prevention, in people with significant Coronary Artery Disease, as mentioned in last post. The latter group have profound damage to their vascular network and are generally in a state of inflammation (including high CRP), making sterol-laden lipoproteins (“Cholesterol”) an aggravating factor in their probability of poor outcomes. So no anti-statin rhetoric here, just some simple analysis….

That said, let’s look in a balanced way at the reality of this latest IMPROVE-IT trial result, shall we?

Obfuscation cleanup first: breathlessly referenced is a study which looked at genetic traits that led to lower gut absorption of cholesterol (a miniscule 12mg/dL lowering) – and in a feat of outrageous assumption and logistical acrobatics, they placed the ~50% reduction of CHD seen, directly at the foot of this slightly lower LDLc that they experienced….eh? And a 1:1 parallel was drawn between this -12mg/dL and the similar LDLc reduction resulting from the Ezetimibe when applied on top of a statin?  Hold on – lowering LDLc by a mere 12mg/dL HALVES your risk of CHD? Really – did they actually just imply that? Remember that our profoundly CHD diseased people in IMPROVE-IT presented with an LDLc of 95mg/dL, while the broadly normal population they issued from have an average LDLc at least 40mg/dL higher than this. So can I then say that an LDLc lowering of 40mg/dL conveys a massive risk of CHD, and will put you into one of these trials? This section of the report is possibly the most risibly ridiculous assertion I have yet come across so far – it is breathtaking in its absurdity.

Anyway, let’s move on and look at the numbers:

Ok, so we see that Ezetimibe gave the ecstatically pleasing further huge reduction in LDLc, dropping a relative 24.3%. And this approach, “turning the LDL-lowering dial up to 11”, and approaching the limits of “how low can you go”, eked out a …. 5.8% reduction in the these profoundly diseased people’s issues over 7 years. Makes some sense I guess – for inflamed people with established CHD, their vascular system in tatters and sporting a myriad of concurrent risk factors, Lipoprotein availability will now be a negative factor interacting with their weak and partly destroyed arterial network. So kinda what you might expect – lower the exposure and a marginal mitigation results – whatever. But not a single life saved. Not even 1 out of 18,000 very sick people in a seven year timespan. How utterly…….underwhelming. LDL again is a sideshow, a distraction from the genuine root causes.

But given the content of the above paragraph, let’s look at the comments from the “scientists” presiding over the party:

“…applauded the study results as a “proof of the LDL theory” — that low is good, but lower is better”

“A truly spectacular result for patients.”

“It reminds us that lowering LDL prevents heart disease…[so]… People can stop yapping.”

The message implied here is clear – let’s lower LDLc all over the place, it’s a fundamental paradigm – whoop!

But that’s not true. That’s not true at all.  The population with LDLc average at >135mg/dL is way better off than the actual CHD people who auto-selected with profound disease at 95mg/dl. So LDLc lowering claim is only for the people already destroyed by hyperinsulinemia, hypertriglyceridemia, hypertension and all the other dysfunctions really driving the bus.

And if you don’t believe me, the world’s foremost Lipid expert, Dr Thomas Dayspring has clearly stated: “majority of MI are explained by INSULIN RESISTANCE. But real message is unless >200 mg/dL – LDLc is terrible biomarker”. Indeed – but not for these turkeys. Roll on Christmas. LDL as the primary driver of CVD – proven? What an embarrassment. What a joke.

Update after writing below blog – new article with more data – crooning captured below is now all the more hilarious – is this really the state of medicine in 2014? http://www.forbes.com/sites/larryhusten/2014/11/17/improve-it-meets-endpoint-and-demonstrates-real-but-modest-clinical-benefit-for-ezetimibe/

Just one real driver they would do better to focus on: 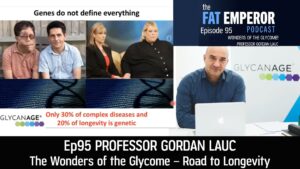 Ep95 The Wonders of the Glycome – Professor Gordan Lauc Reveals

Ep95 The Wonders of the Glycome – Professor Gordan Lauc Reveals 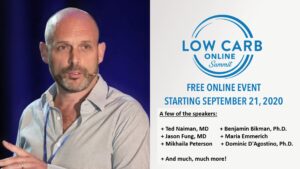 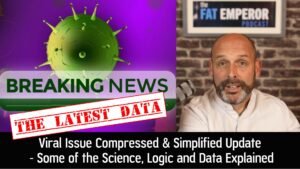