Gut MIcrobiome, Dysbiosis – and the pandemic of Insulin Resistance…

Hi all – I’ve been becoming more and more interested in the linkages between the gut microbiome / dysbiosis and the disease-driving curse of Insulin Resistance. Bad nutritional inputs directly lead to gut issues and potential permeability. These problems in turn have been shown to drive insulin resistance and through inflammatory pathways. To compound things, the bad nutritional inputs also directly drive insulin dysregulation through yet more pathways. The adipose tissue occupies a central mechanistic place in the disaster. Do you see a perfect storm forming here? Yep – right. Let’s take a closer look:

Drew Duglan has done a lovely piece of study tying together some of the threads in this complex web of interaction. I’ve reproduced this below with his permission – enjoy !

(Drew is a post-doctoral researcher at The Scripps Research Institute, currently working in the areas of metabolism and circadian rhythms.)

A convincing case has been made that the development of type 2 diabetes has its origins in adipose tissue dysfunction, leading to uncontrolled lipolysis and the precipitation of full blown systemic insulin resistance (IR). As many intelligent folks here have pointed out (Gabor, Ivor and others), individuals that have the capacity to store excess nutrients by making new adipocytes (hyperplasia) can remain insulin sensitive and are metabolically healthy in their obesity (1). It is instead the enlargement of existing adipocytes (hypertrophy) which is the red flag; under these conditions there is a greater propensity for adipocyte cell death, stimulating the infiltration of immune cells that can induce a damaging pro-inflammatory cascade (2). An initial trigger for much of this may be a process called endoplasmic reticulum (ER) stress. The ER is an intracellular organelle which is critical for things like nutrient metabolism, calcium storage and protein folding. With an imbalance between protein load of the ER and its folding capacity, misfolded/unfolded proteins accumulate, leading to a stress response. Perhaps unsurprisingly, some of the major initiators of ER stress are nutrient overload (or deficiency), hyperglycemia and dyslipidemia; some of the major consequences are oxidative stress, insulin resistance and the activation of the adaptive immune system (3).

Obesity-related insulin resistance in both animals and humans demonstrates an influx of adaptive immune cells into adipose tissue, particularly in the visceral fat regions, usually located around the abdomen. Key players in this process are T-cells, and more specifically, certain subsets: cytotoxic T-cells, T-Helper type 1 (TH1) and type 17 (TH17). These effector cells release different cytokines such as IFN-γ and IL-17, which both directly disrupt insulin signaling in the adipocyte and invite other innate immune cells to the inflammatory house party (4, 5). Macrophages (but also neutrophils) readily accept the invitation and become differentiated into their pro-inflammatory state (M­1), secreting their own cytokines in the process. These chemical factors, such as TNF-α and IL-6, further impair glucose uptake, reduce normal lipid storage and only reinforce the inflammatory positive feedback loop. The negative arm of this process would normally include T-Helper type 2 (TH2) cells and the regulatory T cells (­Tregs), which are anti-inflammatory and help dampen the hostility of the immune system, in an effort to avoid potential autoimmune responses. However, during IR these immune buffering tactics are compromised; the adipose tissue shows reduced populations of these modulatory cells and the careful balance shifts towards the pro-inflammatory state (6).

At the same time, adipose tissue inflammation may also suppress the function of different lymphoid tissues elsewhere. Metabolic syndrome is associated with increased ectopic fat deposition in the bone marrow and thymus, areas that are critical for the generation and maturation of adaptive immune cells. This results in a less diverse population of T-cells, effectively restricting the range of invading pathogens to which our immune system can respond (7). So while the adipose tissue summons increasing numbers of pro-inflammatory leukocytes, it limits resources elsewhere, impairing normal immune surveillance. This may go some way to explaining why obesity and insulin resistant folks suffer more from common infections and respond less successfully to vaccinations (8). The hormone and lipid profile typical of IR will only make this situation worse: diminished responsiveness to insulin prevents the differentiation of anti-inflammatory T-helper cells (9); HDL is decreased, which normally neutralizes bacterial lipopolysaccharide; while elevated leptin and reduced adiponectin prevents appropriate modulation of the immune system (10, 11).

A self-reinforcing loop towards autoimmunity?

Aside from a hypervigilant immune system, autoimmunity is normally also characterized by autoantibodies directed at self-antigens i.e. elements of our own tissues. Not only do B lymphocytes directly activate pro-inflammatory T cells during IR, they can indeed produce pathogenic antibodies to certain host cell proteins. Screening of obese subjects has shown that IR is associated with a distinct circulating autoantibody profile, with some of the most abundant antigen targets being proteins in the Golgi apparatus or glial fibrillary proteins (12). It’s concerning that the bulk of these targets are intracellular proteins ubiquitously expressed in all manner of tissues, such as the nervous system, pancreas, liver, muscle and fat. It seems plausible that adipocyte cell death could initially release antigenic proteins that not only trigger an autoimmune response at the site of the adipose tissue, but also prime the adaptive immune system to eventually recognize those same proteins in other organs. Alternatively, these antigens may simply already be present due to other tissue inflammation and cell death, potentially in response to hyperglycemia or ectopic lipid deposition. Some of the most frequently detected autoantibodies in type 2 diabetic subjects are those directed at the pancreatic beta cells, which may be predictive of future beta cell burnout (13). These cells seem to be particularly vulnerable to hyperinsulinemia, lipotoxicity and inflammation, which is often occurring long before a standard diagnosis of type 2 diabetes (based on blood glucose) is ever made.

Inflammation inside and out

Admittedly, the chronic inflammation is being viewed here from an “inside-out” perspective, i.e. insulin resistance within the adipose tissue that then triggers metabolic and immune dysregulation in the periphery. It’s worth noting, however, that this downward spiral of IR may be sparked and/or perpetuated by more of an “outside-in” process, namely gut dysbiosis. The presence of intestinal permeability and altered gut microbiota can be observed in obese subjects, which opens the door to foreign particles that can induce an immune response and contribute directly to adipose tissue inflammation (14, 15, 16). For those folks who are metabolically very sick, it’s quite possible that both these mechanisms are at play. This 1-2 punch would see over-filled adipose stores switching on insulin resistance and heavily recruiting innate and adaptive immune cells, only to be joined by antigenic material that breaches a leaky gut during the continued ingestion of an inflammatory diet. 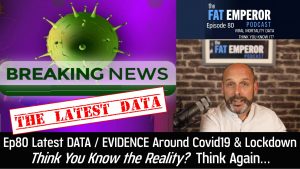 Ep80 Latest DATA and EVIDENCE – Have our Lockdowns been Effective?

Ep80 Latest DATA and EVIDENCE – Have our Lockdowns been Effective? 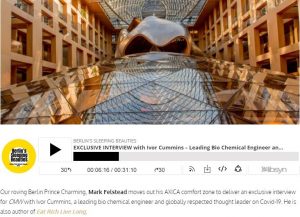 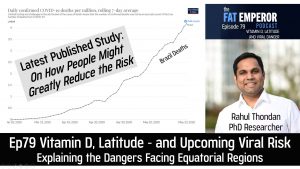