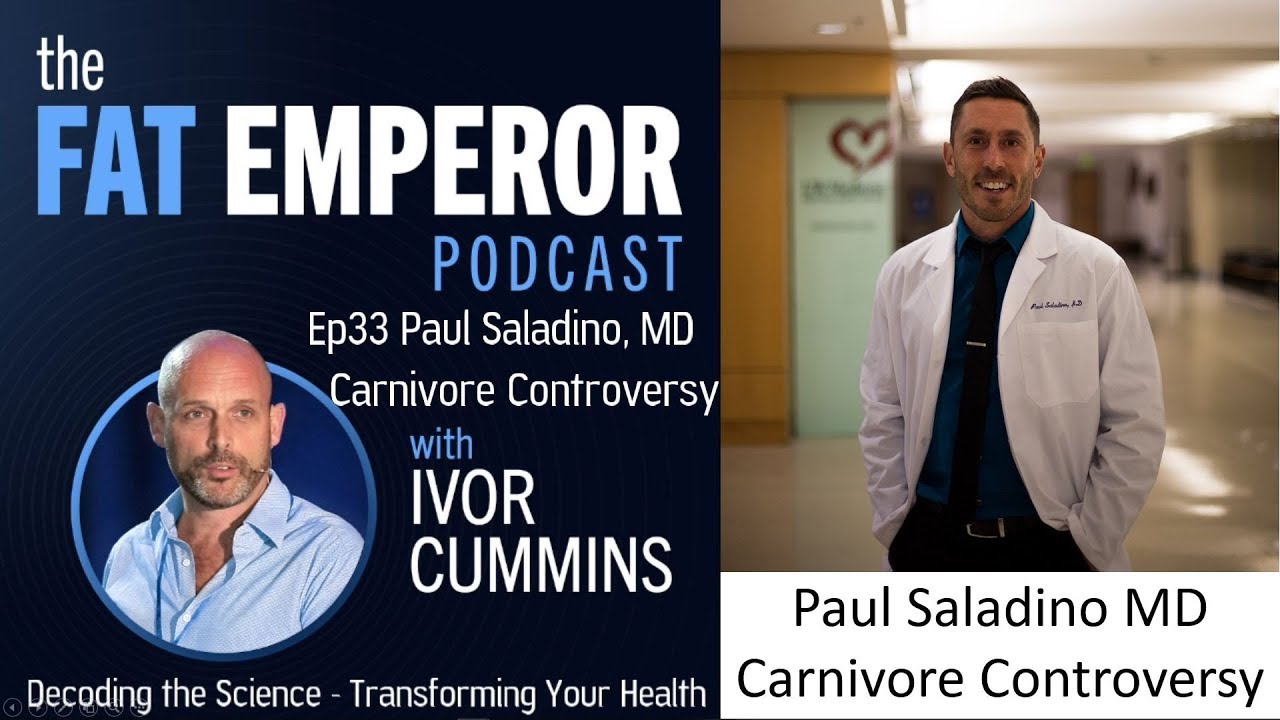 Ep33 Paul Saladino MD is a Carnivore Doctor What Does His Research Reveal?

The well-researched and articulate Paul Saladino MD – what a great discussion – see index below!

For full TRANSCRIPT, scroll down below index

00:08:04 Paleoanthropology – and how our bodies function best

00:32:34 Cholesterol and particle numbers – LDLp and ApoB – is the risk rational?

00:45:59 Thomas Dayspring & the credibility of ApoBB Bullets shooting up your arteries

00:56:49 Mikhaila Peterson, and the power of elimination in these diets

01:29:00 A challenge – show me a disease that is not autoimmune that is chronic

Ivor Cummins 00:00:51 Today, I have the pleasure of meeting with Dr. Paul Saladino, who is not your average ho-hum doctor at all, he has quite unusual dietary habits and some strong views on cholesterol and other things that not every orthodox doctor would share. So great to meet you, Paul, finally.

Paul Saladino 00:01:10 You too, Ivor. I’m a big fan, and I’m so excited about this conversation, about all things, carnivore diet, which many people may or may not be familiar with. But there’s so many interesting nuances here with regard to lipids and autoimmune disease. It’s going to be a great conversation.

Ivor 00:01:27 Yeah. I always love discussing these things, even though they are kind of fringe at the moment. And it might not be for everyone. And some people perceive carnivore as extreme, which is fair enough. But you could also say that vegan on the other end is extreme. So I think it’s all about personal choice.

Paul 00:01:44 You know, if you go to your family physician, whether it’s in Ireland or in the United States, and you say to them, “I’m going to eat a plant based diet,” they’re going to say, “Wow!” They’re going to pat you on the back. If you go to your family physician, “I’m going to eat all vegetables, and no meat, no animal products,” they will pat you on the back right now and send you out the door with just a smile on their face, imagining that you are going to have fantastic health and live to be 120 years old.

00:02:12 If you go into your family doctor and say, “I’m eating a carnivore diet, and I’m not going to eat any plants, I’m just going to eat animals nose to tail, like our ancestors did,” and we can dig into that, they will absolutely lose their shit. They will freak out. They may fall over. They may grab you by the shoulders and shake you and say, “What are you doing? You’re crazy.” I’ve been super fascinated by the evolutionary origins of where humans have come from and kind of this concordance between our book of life, our genetics and the way we’re eating. And I’ve come to believe very strongly over the last year that humans evolved as animal eaters, primarily. I had a really interesting conversation with Miki Ben-Dor who’s a paleoanthropologist, on my YouTube channel. And you can look at these recent studies that have come out looking at nitrogen levels and the Neanderthals and early Homo sapiens from 70,000 – 80,000 years ago, and they pretty clearly suggest that the nitrogen levels were so high in our college and that we were eating, we were high level trophic carnivores.

00:03:15 So the concept of humans as carnivores, or primarily hunters, is only strange to us in the last 70 years as he westernized humans on this planet. I think evolutionarily, there’s an argument and then if we actually look at the biology and why we maybe don’t want to eat all plants, or some people might want to eliminate plants completely, it makes a lot of sense. But it is, it is a pretty radical concept. And I’ll admit that even I, when I first heard about it thought, “That’s crazy.” But as I really dug more into it, I realized that there was a lot of conditioning there and there’s a lot of stuff that doesn’t really hold up to scientific rigor when you look into it for reasons for eating plants, or reasons not to eat animals. So it’s a really fascinating conversation.