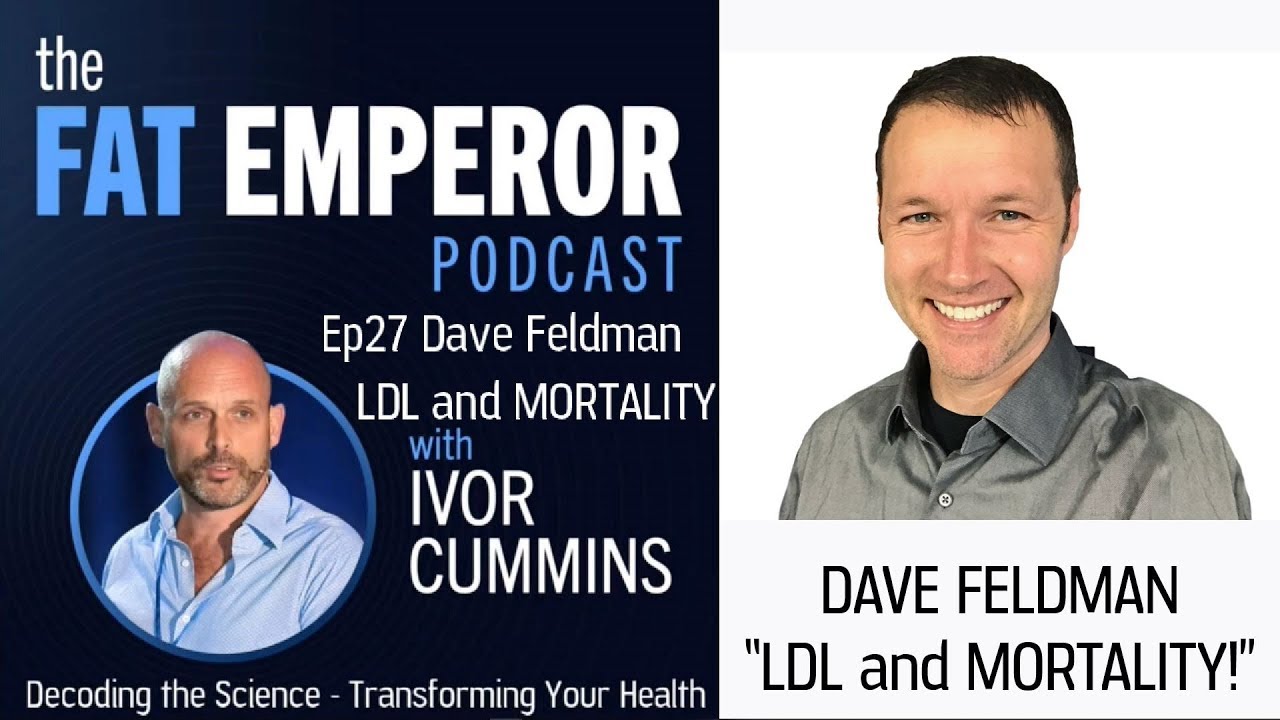 FULL PODCAST 27: LDL and All-Cause Mortality – Does Cholesterol Kill You?

Dave Feldman with new data on LDL and….ALL CAUSE MORTALITY!

Does Cholesterol kill you?  Well look and see…!

04:10 And the answer? Does higher LDL shorten your life?

06:24 A discussion on “Reverse Causality” – could it confound?

10:38` The confounding of it all – LDL is riddled with correlation to bad things

15:51 More opportunities like this in the future – with more mining!

Ivor Cummins 00:00 I’m here at Keto Salt Lake for a conference, which just started today. And I caught up again with Dave Feldman, who just gave a fascinating talk again on LDL but with some very new data. Great to see you again, Dave.

Dave Feldman 00:14 Likewise, Ivor. Thanks for having me.

Ivor 00:16 Not at all. Always a pleasure. Now, you had new data today, because I know that we’ve all wondered about LDL being a problematic compound in the body. And it seems there’s been lots of data over the last five or six years where when LDL is high but other things like HDL are high and triglycerides are low, most of the data suggests there’s no problem with LDL being high. But today was different because you pulled databases of 50,000 people, and you did a bit of analysis, and the results were quite stunning. So maybe if you start going through some of those.

Dave 00:50 Yeah. Well, of course, as you know, this has been a bit of a long history. I’ve not been in the space quite as long as you have but in the time that I have, I’ve been interested in how these markers play out, particularly as you were kind of mentioning outside of LDL, HDL cholesterol and triglycerides. And it’s always been a bit frustrating because as you know, all we pretty much can do is trade studies between each other. If we ourselves are not, you know, researchers with that data on hand, it’s hard for us to look through raw data. But we’re engineers, right? So engineers, we like to get under the hood of things and start taking it apart.

01:28 I was fortunate to have the help of Tommy Wood in being able to get ahold of the NHANES (National Health and Nutrition Examination Survey) data. I can’t say right off hand, but it’s basically the North American… it’s kind of survey data, but also includes a lot of blood work, which was pretty fascinating. And there are different kinds of sets, but the set we got ahold of was basically everything from 1999 to I want to say 2015. So it was really quite a lot of data. I think once we determined everybody who is eligible, they came in at around, I want to say 40,000. And once I had that in hand, I just went crazy. Had a good time, because of course, I wanted to know for myself without anybody curating the data for me and their study, and by using adjustments they wanted to use, what would I see? Right? So naturally, without wasting any time at all, I went, “All right, I want to see LDL, and of course, my favorite market, which you know, is all-cause mortality – live longer or not.

02:55 Well then I went to check to confirm that indeed all of these people in the stratifications were nearly identical to each other in many of the things that also matter for mortality such as age. They’re not. So I then had to go, “All right, where is it that I could find where the ages will have parity to each other?” And I found that that could be in age 50 and up. So, once we had age 50 and up and then we stratified by LDL again, and then on top of that you apply follow up time, because the follow up time was also different between these different stratifications. So, we just changed it to be simply a mortality per year, a follow up. Simply put, if you have an LDL of say zero to 80, what percent of those people in your group are going to die per year?

Ivor 03:49 So standardized by age, you must do because age is a huge risk factor for mortality.

Ivor 10:38` Yeah. And also, that 20 year study I mentioned, they also saw dramatic consistency within-person for LDL readings when they had multiple readings. So it wasn’t even the case that you got one low reading. They showed consistency and remarkably low variability per person. Their LDL was broadly consistent throughout the long period. So I think this is really tight data. And in a sense, this data overturns all of the theory that higher LDL is worse, even higher LDL over life is worse. And this resonates with all the autopsy data that shows no link between LDL and atherosclerosis level. And links with many other studies which show LDL doesn’t really show up. And yet we still have this pervasive belief that LDL is the “sine qua non” or the key thing in CVD and in disease. So it’s going to take a long time to overturn that, do you think?
Dave 11:37 Well, in… I’ll give a little more of a nuanced answer. I definitely do think that your LDL can be high for a bad reason. And I kind of go into that into the talk and I don’t want to unpack that too much, but I’m just going to say basically, this, that I think it can be a downstream result of something to the degree with which it’s a cause of something that I have a little more of a challenge toward. Because the downstream results of something, as I mentioned in the talk, the two main channels of area are metabolic dysregulation; if you’re metabolically unhealthy and therefore you have more VLDLs, right?
Ivor 12:15 Yeah.
Dave 12:16 And also, if you’re in a state of a challenge such as a disease, especially if it’s chronic disease like chronic inflammation, you also may have more VLDLs because there may be more, for example, cytokines signaling to the liver to generate more of these to help fight it, right?
Ivor 12:31 Yes.
Dave 12:32 But in both of these examples I just mentioned, you see higher remnants, which are those lipoproteins that actually aren’t LDLs, but also have cholesterol and they tend to be bloated with triglycerides. And metabolic dysregulation, you have trouble parking the triglycerides into the tissues, which is another reason why you see high triglycerides. Which is why in both cases, you pretty much can often look to triglycerides, especially low HDL. Either of those two and especially both of them already have in the literature something known as atherogenic dyslipidemia, which is the two of those together coupled finally added to a preponderance of small dense LDL particles.
13:15 If you have the flip side of that, and high LDL, I have yet to see in the data where this is associated with worse outcomes, especially with all-cause mortality. And that is a problem, the very thing you’re talking about, the context definitely matters.

Ivor 13:30 And it sounds like… I mean, I kind of found this for six or seven years now. LDL kind of rideshares on the back of much more important root causes because it tends to track. Like, higher particle count is a classic indication of metabolic syndrome or insulin resistance. So it’s going to track and rideshare. And the LDL itself… I mean, really, Professor Ken Sikaris from, I don’t know, was it Australia or New Zealand?
Dave 13:59 It’s Australia.
Ivor 13:59 Australia. Fantastic lecture recently and he showed me something I’d known from papers five years ago. But when your HbA1c is in the normal range, the LDL is at moderate levels on huge datasets. But when your HDL or your HbA1c goes into prediabetic, the LDL rises, right? So now LDL is correlating what high HbA1c.
Dave 14:22 Right.
Ivor 14:23 And later when you’ve even higher HbA1c, the LDL comes down again. And then when you get to really, really high HbA1c, the LDL goes right up again – really high. So it’s such yet another example where LDL is tracking with other much more important causes, and getting gifted with a correlation with heart disease.
Dave 14:42 And you want to know my theory for that by the way? My theory for that is because what’s actually happening is you have a higher triglyceride response, especially in like a very intensive, refined carbohydrate diet, right? It’s kind of comparable to the glucose response, where basically you have a hyperinsulinemic response that shuttles away both the glucose in the higher triglycerides. But per the energy model, what gets leftover? Higher LDL. You have higher LDL because there was more trafficking of the VLDLs leaving LDL leftover.
Ivor 15:16 So in a sense, LDL almost acts like a kind of remnant there. It’s an after-effect of much more important processes that are linked to disease.
Dave 15:25 Right. That’s my theory on that. Again, I like to say this a lot. But looking at LDL is sort of like looking at the last chapter of a long book. You don’t know the story before the last chapter so you can’t say a lot about what it means.
Ivor 15:39 And to that analogy – it is certainly not a summary chapter either.
Dave 15:43 No, it’s not.
Ivor 15:45 It’s a specialized, disjointed, separate chapter just stuck at the end of the book!
Dave 15:51 Right, right. And that’s why like I’ve always been excited to have the opportunity to look at LDL in the context of these other markers. That’s why the NHANES was a game changer for me personally. But I think I want to make it also a game changer for us in this conversation. You and I, we obviously agree on quite a lot. But there’s a lot of people who are watching us right now who don’t agree. Especially if you yourself are already a scientist and you can get access to the NHANES data because it is publicly available – and as I understand a lot of university students work from it as well – then you can carry this conversation forward with us, because unlike trading studies, we can actually trade analysis on the same dataset.
16:29 I would be interested in what anybody could come up with, with the NHANES data in a justifiable way, something that makes sense, to show that, “No, LDL is worse at higher levels for all-cause mortality.”
Ivor: 16:42 Yeah. Or even perhaps with some more analysis – and I know you have some tentative stuff – we won’t get into yet, even cardiovascular mortality. When HDL is appropriately high and triglyceride is low, we may yet see that even for cardiovascular mortality the higher LDL does not indicate any extra mortality.
Dave 17:02 Possibly.
Ivor 17:04 Excellent. So I’ll tell you what I’m going to do for this Dave, I always intend it, but I don’t get to it, I’m too busy. I will take some of your graphs in the presentation as we discussed this in this podcast, and put them in there just for people to see them because they’re quite dramatic. And, it’s just fascinating to look at them. And they’re so iconoclastic or disruptive to most of the world’s belief system. So we’ll do that.
17:28 Hopefully people will look at an NHANES database. As you say, it’s freely available. Do some analysis, come up with counterpoints, but I suspect that they won’t be able to come up with any. That’s just my thought.
Dave 17:40 We’ll see.
Ivor 17:41 We’ll see. Thanks a lot, Dave.